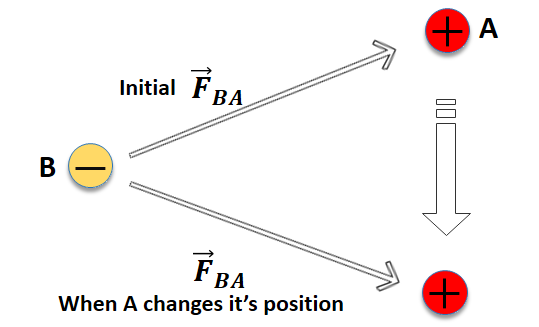 , we conclude that Electric and magnetic forces are :-

Let us discuss the last point of  no time dependence of F.

For that consider two charge particles A and B. Let us represent the electrostatic force “on B due to A” by

must always remain from B to A. Now if the charge A starts moving then the direction and magnitude of

must also change, i.e. the force vector must pivot to follow A.

Now the question here is does this happen instantly? Or is there some time delay between the movement of Charge A and the response of force vector

The question becomes more troubling if we assume the charge particles to be at a very large distance (a few light years away) from each other. Will in that case the response will be instantaneous or there will be some time delay??

This idea of instantaneous transmission of force between charge particles become inconvincible to most scientists by the beginning of the 19th century.

Michael Faraday (22 September 1791 – 25 August 1867) first came up with the idea to call the region around a charge particle as “field”, which is now called as electric field. The word “field”, actually comes from mathematics, which describes a function that assigns a vector to every point in space. According to Faraday long-range forces (electric and gravitational) operates by alternation of space, i.e., a charge particle first alters or modifies the space around it, and then this alternation of space interact with other charge particles.

Michael Faraday’s mathematical abilities were limited to simple algebra, but he was an excellent experimentalist and he used to convey his ideas in clear and simple language with his imagination.

Later James Clerk Maxwell took the work of Faraday and others and summarized it in a set of four equations in 1865, which is the basis of all modern theories of electromagnetic phenomena.

Hi, I'm Manoj Kumar Verma, a physics faculty having 9 years of teaching experience. I have done B.Tech (E.E.). I am also a YouTuber and Blogger. This blog is dedicated to help students learn the physics concepts easily.